Start a Wiki
Assault Vets are a step up from Grunts. They are unarmored, like any infantry, but they have a machine gun that can pierce light vehicles, like Recons. The sheer volume of fire means that Assault veterans can easily tear up nearly any unit with the exception of fast and high flying aircraft with ease in Battalion Wars, even at great distances.

In Battalion Wars II, the Assault veterans' damage was lowered down as well as accuracy, but they were still capable of devastating clustered infantry and do reasonable damage against vehicles when given enough time.

Like Flame Veterans, an Assault Vet's weapon runs on a heat system. The gun starts off firing very slowly, but soon builds up momentum to outpace most automatic weaponry. The only downside is that if the weapon overheats, it becomes unable to fire until it completely cools down, resetting the fire rate.

The belt-fet H-70 heavy-caliber machine gun is capable of supplying up to 260 rounds per minute. In spite of efforts to reduce recoil vibration, sustained use can leave even the most seasoned veterans teeth chattering for days.

The heavy-weight Kasparov KA-600 is the KA-57's big brother. The veteran units assigned to this weapon sport reinforced helmets to protect them from the characteristically weighty ejected round casings.

Only infantry who have performed great deeds in battle see their PlasRifles replaced with a Hi-Frequency Plasma Beam Emitter. This weapon fires a focused cutting plasma so fine it can split the hairs on an enemy grunt's head.

The gas-operated .44 "Grump" gun is equally suited to magazine or belt-fed munitions. Veteran operators favor the former, with magazines better suited to keeping ammunition clean. Anglo infantrymen can find themselves on a charge for carrying dirty rounds.

The water-jacket cooled "Barrel Organ" Spanzow minigun fires at 1,200 rounds per minute. The distinctive noise it generates has lent it the nickname "Vlad's Buzz Saw".

Sophisticated clockwork mechanisms constructed by Legion engineers allowed a remarkable rate of fire for Streykar infantrymen, their workmanship unsurpassed even today. Antique models recoverd by Xylvanians are often dismantled to be used in timepieces. 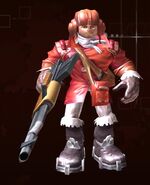 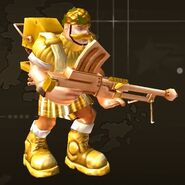 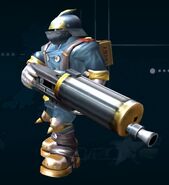 Retrieved from "https://battalionwars.fandom.com/wiki/Assault_Veteran?oldid=8413"
Community content is available under CC-BY-SA unless otherwise noted.