Start a Wiki
Bazooka Vets are the strongest veterans in terms of attack power. They can easily take out most Ground Vehicles as long as they avoid getting hit too hard, although Battlestations are too heavily armored to be taken out easily. Player-controlled Bazooka Vets can charge their weapon to make the rocket fly faster and hit harder. They can also demolish enemy fortifications, like MG towers, with charged attacks able to destroy all but the heaviest fortifications in a single hit.

Infantry can easily dodge the shells launched by them, although if they're hit, they'll take considerable damage, with charged shots able to instantly kill them. Any vehicle, except the Artillery and Battlestation, is fast enough to dodge their shells as long as the vehicle keeps its distance and is under manual control.

While in theory the Bazooka Vet could be used to attack air and sea units, that would require a unit to actually be within a distance that the Bazooka Vet can reliably hit at, which also tends to be well within the effective range of other weapons such as Gunship rockets and Battleship cannons.

Anti-tank specialist infantry are equipped with H1-A1 recoilless rocket launchers, which have changed little in design in over 20 years.

The product of Tsar Gorgi's GORG-21 design bureau, the lightweight RPG-1 has earned the nickname "the can opener." Marshall Nova keeps 2 of these weapons in his stateroom to honor his father.

Coral Atolls's weaponsmiths take great care in the gloom of their mountian-cave workshops crafting the barrels of the ballistic weaponry taken into battle by Solar Empire "Croaking Frog" anti-tank veterans. The payoff is pinpoint accuracy.

M-25 "Toffee Apple" anti-armour veterans must make especially sure their regulation handlebar moustache is no longer than the allowed 4.25 inches. Any bushier, and the operator risks propellant exhaust leading to singed whiskers. 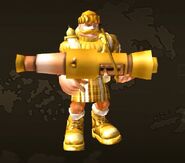 Retrieved from "https://battalionwars.fandom.com/wiki/Bazooka_Veteran?oldid=8412"
Community content is available under CC-BY-SA unless otherwise noted.