Start a Wiki
Flame Vets are the anti-infantry specialist in short range combat. Though their flamethrowers do well against tightly packed enemy infantry and can ignore sandbag cover, they see less effectiveness against any form of vehicle.

Early iterations of the H2-2 Thermidor anti-personnel flamethrower were designed to run on tank gasoline. General Herman was so eager to deploy them in the field that whole armor battalions were almost left stranded without fuel.

Originally developed with no military application in mind, the TOZT-23 Defroster was designed to free naval vessels trapped by sheet ice. It is now used to lighty toast Xylvanian marauders.

The power coils of the "Vengeful Wind" plasma flame projector are forged over many years. Complex alloys are taken and meticulously worked under the light of the moon, the night air cooling the tempered metals treated to withstand the high-temperature plasma they must channel.

These infantrymen form the vanguard of an Anglo advance, striking fear into the heart of the enemy with the distinctive noise produced by their weapon's bag-and-pipe propellant system. The T-22 "Puff Dragon" flamethrower they carry can also brown a teacake in seconds.

Acid Gas units are equipped with a backpack of pressurized Ghosgene gas. The vile substance has phosphor-type properties and can trigger incandescent self-combustion when used against personnel.

Razenkriege Division anti-infantry shock troopers were a devastating frontline deployment. All that stood in their way was incinerated. The pressurized Nerocite reaction, which fueled the weapon's furnace, generated an ear-piercing scream that often drove its user insane. When fighting Undead legionnaires, the scream is often attributed to a supernatural source. 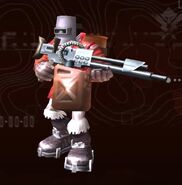 Retrieved from "https://battalionwars.fandom.com/wiki/Flame_Veteran?oldid=8411"
Community content is available under CC-BY-SA unless otherwise noted.